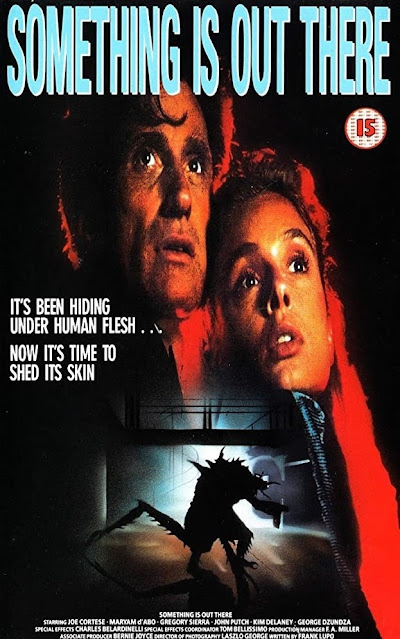 When police detectives Jack Breslin (Joe Cortese) and Frank Delio (George Dzunda) investigate mysterious killings, Breslin alone sees evidence that the killer may be something superhuman. He doggedly seeks to follow his few leads, though his hot rich fiancee Mandy-- daughter of the police commissioner-- constantly seeks to make the raffish lawman act more respectably in anticipation of their marriage.

The trope of the man who suspects that he's about to marry a subtle ball-buster-- a trope also seen in the first episodes of I DREAM OF JEANNIE as well-- is quickly followed by the guy's introduction to a ethereal female who both liberates him from convention and places even greater demands on him. One of Breslin's leads is an alien artifact, though he doesn't recognize it as such. The artifact's owner, a lissome blonde named Ta'ra (Maryam D'Abo), comes looking for the item and fights with Breslin over it. When the cop subdues the intruder, she admits that she's an alien med-tech, chasing down a rapacious "xenomorph" that's responsible for the killings. Ta'ra warns that Breslin can never find and destroy the xenomorph without her help. Instead of turning the sexy blonde over to the federal government, Breslin makes the highly difficult decision to let her move in with him-- though this means constantly being forced to explain Earth life to this feminine "fish out of water," and having her read his mind every time he has a sexy thought about her.

For a TV-film, the producers put some real money into the project, coming up with a passable ALIEN-clone as well as staging the duo's alien-hunting rather well. But the monster is of minor importance; he's just there to force Breslin and Ta'ra into compromising positions, eventually breaking up Breslin's engagement, though not in the comic manner of JEANNIE. D'Abo and Cortese display good chemistry, though for my money George Dzunda delivers the best performance, as a cop who's deeply invested in his partner's welfare and ends up perishing because of Breslin's secret mission.

The mini-series was followed by a very short-lived teleseries, which predictably did not have the same budgetary largesse and so ended up looking barely more competent than THE POWERS OF MATTHEW STARR. Though producer Frank Lupo made a fair number of metaphenomenal TV shows, he had his greatest success with naturalistic heroes like those seen in HUNTER and THE A-TEAM.

Posted by Gene Phillips at 3:50 PM
Email ThisBlogThis!Share to TwitterShare to FacebookShare to Pinterest
Labels: combative adventures, the marvelous