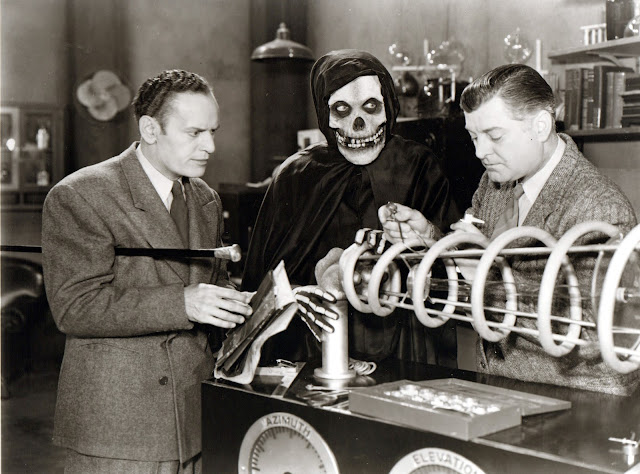 The most interesting sociological aspects of CRIMSON GHOST occurs in the first chapter. The Ghost-- whose macabre choice of attire is never given any connotation-- explains to his henchmen that he plans to hijack the Cyclotrode, a device able to disrupt any electrical mechanisms. Its inventor Professor Chambers wanted to strengthen America's defenses to ward off a possible atomic bomb attack (which presumably would be dropped by plane like the ones over Japan). One of the Ghost's henchmen comments that the most profitable avenue would be to steal the Cyclotrode and sell it to a foreign power. But the Ghost makes clear that he has no interest in selling ordnance to other countries. He's a super-criminal through and through: he wants to use the Cyclotrode to blackmail multiple cities into making him rich. I interpret this as the scriptwriters' assurance to viewers that GHOST wasn't going to be a political serial like many that came out during the war years, but a pure "good guy vs. supercriminal" yarn.

The Crimson Ghost, in addition to being a snappy dresser, shows his own scientific genius in devising "control collars" that can execute any henchman who disobeys the villain's will. The henchmen (the main one played by Clayton "Lone Ranger" Moore) kidnap Chambers from his private home, which gets the serial's two good guys on the trail.

One hero is Chambers' secretary Diana (Linda Stirling). She falls into the role of crimefighter pretty easily, even though Chambers dies early in the story, and is seen wielding a pistol with an aplomb not typical of the typing pool. (Maybe there was some idea of her being a government agent in disguise?) The other protagonist is Duncan Richards (Charles Quigley), who is both a criminologist and a physician-colleague to Chambers. I assume that the scriptwriters wanted Richards to be able to discuss the physics of their opponents' diabolical devices before he went around bashing in heads and driving real fast along country roads in pursuit of other cars.

Quigley, BTW, doesn't always look nearly as formidable during the fight-scenes as the typical Republic he-man, which may or may not say something about how heavily he was doubled. Yet the fights are still staged well enough that the Richards character still seems badass, but a little more human than the average serial hero. Quigley and Stirling have nice chemistry despite the usual lack of romantic interaction, but Stirling is once again relegated to the role of the girl hero who keeps getting hit on the head to get her out of the way of the slugfests.

The more we see of the Crimson Ghost's fairly picayune efforts to perpetrate his super-crimes, the more repetitive they become, with the only variable being the scripters' trying to find new ways to stall out this or that machine. The villain is one of the more active types, often seen getting attacked along with his henchmen and being drawn into brawls with Richards-- and that may be one reason that his costume has become a lot more iconic than many of the robed fiends who never bother to leave their sanctums.

Posted by Gene Phillips at 3:20 PM
Email ThisBlogThis!Share to TwitterShare to FacebookShare to Pinterest
Labels: combative adventures, the marvelous