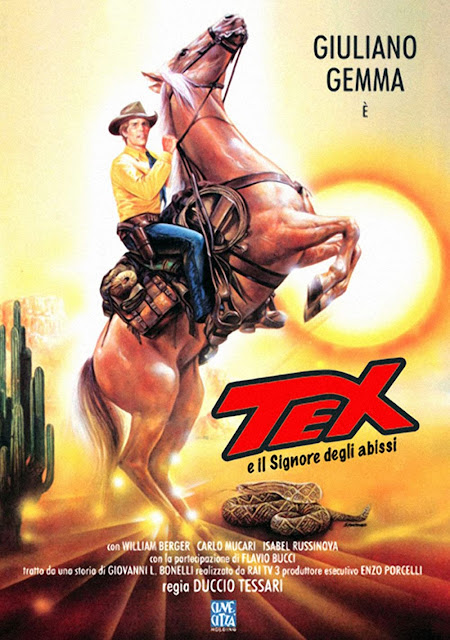 I've never read any of the TEX comics, which became very popular in Europe since Italy published the first serial in 1948. Tex, whose full name is Tex Willer, is largely unknown in the U.S., and this movie-- henceforth abbreviated to LORD-- seems to be the only English-language translation of the character into any medium.

The movie is said to have been an unofficial pilot for a television series. But despite its having adapted sequences from three of the comic serial's arcs, and despite having the directorial services of Duccio Tessari, LORD flopped at the Italian box office, so there was no teleseries. Possibly the budget was limited from the get-go because any teleserial would also have been similarly limited.

LORD starts out moderately well, using long shots of Western natural wonders and a portentous voice-over to introduce the audience to the upstanding ranger Tex Willer (Giuliano Genma), who pals around with a stalwart Indian buddy and the real-life scout Kit Carson (thus making this stand-alone film a sort of crossover-work). Tex is seen avenging some Indians from white scumbags who've been selling them liquor.

Then the plot proper starts, as Tex and his friends track some bandits who've ripped off a convoy of Army rifles. The heroes learn that the bandits may be working with a mysterious cult of living Aztecs who possess strange magical abilities. Tex and his buddies even witness one such ability, when a survivor of the convoy raid is subjected to some force that melts away the flesh of his face, leaving a skull (the only good effect in the film).

Meanwhile, the film segues to showing the Aztecs, who plot to conquer the world by uniting the Indian tribes against the White Man, and continuing their age-old custom of sacrificing human beings to their gods. The Aztecs, one of whom is female, debate their next move, while Tex and his friends seek them out--

And the two never meet. The remainder of the film trails off as Tex's band fights with some of the bandits, but the heroes never meet the Aztec plotters, and the latter are apparently defeated when their alchemical weapon goes awry.

I don't think one can blame this incoherence on budget alone. LORD just seems to be one of those bad-luck films in which everything just goes wrong and everyone involved just wants it to be over and done with it. Genma had an impressive career playing heroes in westerns and in sword-and-sandal flicks, but it's impossible to judge whether or not he could have done a good version of this character, since his work is undercut at every turn. The flick doesn't even play to the sword-and-sandal tradition of playing up a hot evil queen, since the female Aztec's scenes are short and unmemorable.

Posted by Gene Phillips at 3:45 PM
Email ThisBlogThis!Share to TwitterShare to FacebookShare to Pinterest
Labels: combative adventures, the marvelous