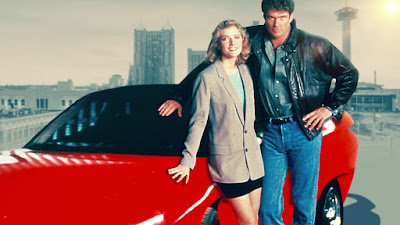 The original 1982-86 KNIGHT RIDER was in some ways the perfect "bland TV superhero." His adventures with the intelligent talking car KITT never delved into controversial topics, and so was perfect for kids of the time, possibly even more so than THE SIX MILLION DOLLAR MAN, which more often showed the hero dating and maybe even about to have sex. David Hasselhoff played main (human) character Michael Knight as a breezy, "hail fellow well met" extrovert, while his automated ally projected an acerbic and finicky air through the offices of voice-actor William Daniels. The combination of "paired opposites" remained the show's strongest selling point. For four years Michael and KITT tooled around the country, solving crimes and protecting innocents on the behalf of a philanthropic foundation headed by genial overseer Devon (Edward Mulhare).

Roughly five years later, a new production company-- apparently not allied with the show's originator Glen Larson-- floated this pilot for a more futuristic pilot, set nine years from the time of the movie. The only "science fiction" aspect of this near-future was sociological, for in 2000 handguns are banned for ordinary citizens while criminals have no problem getting them (which itself sounds like a dystopia from Fox News).

Though Michael Knight retired from the Foundation years ago, for reasons the script never specifies, Devon is still in there pitching for a new/old solution to burgeoning crime: the "Knight 4000," a revved up version of the old KITT model. The actual components of KITT were disassembled and sold off to other vendors. Devon coaxes Michael out of retirement to drive the 4000, but when Michael returns, he's aghast that his old driving-buddy has been mistreated (though apparently Michael wasn't concerned enough to keep in contact with Devon over the years). Knight manages to re-acquire all of the components of KITT and bring back the sardonic computer-intelligence to inhabit the 4000-- except for just one chip.

That chip, as it happens, winds up in the brain of police officer Shawn McCormick (Susan Norman). McCormick was shot while trying to capture master crook Thomas Watts (Mitch Pileggi), but for some reason the surgeon who restored her to life used that missing chip to revitalize McCormick's brain. Eventually McCormick crosses paths with Michael and KITT and, after some initial sniping, the three of them join forces to bring down Watts and his cohorts.

The script and direction are competent, with an interesting conservative take on organized crime, and there's a little nostalgia value in seeing one last team-up between Hasselhoff and Daniels, a value not impaired by the intro of a "fifth wheel" (so to speak). But the subject matter is a little more serious than the light-hearted original series would have ever attempted, and the suture between old and new remains jagged at best.

Posted by Gene Phillips at 4:03 PM
Email ThisBlogThis!Share to TwitterShare to FacebookShare to Pinterest
Labels: combative adventures, the marvelous