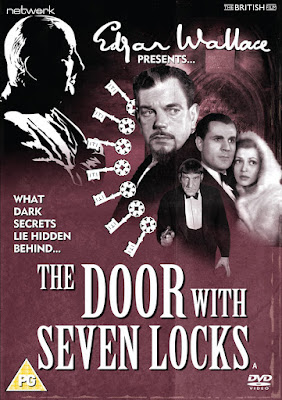 THE DOOR WITH SEVEN LOCKS was the second English adaptation of an Edgar Wallace novel to reach American shores, and it shows an attempt, if not always a successful one, to craft a British-made thriller considerably less fusty than those of the thirties. Director Norman Lee, who's currently not remembered for much beyond DOOR, does a good job of keeping the mise-en-scene fairly lively despite having to execute loads of mystery-oriented talking-head scenes.

Since I'm not likely to ever read the 1926 Wallace mystery, I did glean a few details about the source material from Goodreads. The movie seems to be faithful to Wallace's concept. On his deathbed, an English lord bequeaths a hidden treasure to his heirs, but they can only get the riches under assorted complicated circumstances, including the use of seven special keys designed to open the door to the treasure. The keys enter the custody of an executor for roughly the next ten years, so that a foreign heir, who knows nothing of her blood relation to the lord, has time to grow up and became young June Lansdowne (a striking Lilli Palmer). A friend of the family somehow learns of June and contacts her about the legacy, so she and a comical girl-friend fly to Great Britain. The two ladies arrive just in time to see an organized conspiracy by some of the heirs-- including sinister Doctor Manetta (Leslie Banks of THE MOST DANGEROUS GAME) A young local cop, Dick Martin (Romilly Lunge), gets drawn into June's troubles, patently because he fancies June.

What's surprising is that in content this quasi-Gothic mystery is identical to dozens of others from the period, this is one of the few to qualify for the combative mode, in that Martin has a lively battle with a burglar who breaks into June's room, later battles Manetta's mute servant, and finally fights the evil doctor at the film's climax. Possibly the novel is just as comparatively violent, given that some reviews intimate that Dick is the main character in the source novel. In the original story Dick and June have to contend with some sort of mad scientist. But the scripters of DOOR, one of whom was also the director, chose to place more emphasis on the character of the conspirators' leader Doctor Manetta. Without reading the novel I can't be sure, but I don't think it's coincidence that Leslie Banks' most renowned character, Count Zaroff, displays a sadistic mindset, while Manetta claims to be a descendant of the Spanish torturer Torquemada. Zaroff also had a mute servant, as does Manetta. Manetta also keeps a roomful of exotic torture-devices, but there doesn't seem to be any evidence that he uses them on innocent victims. Still, the torture-room is the site of the end-fight, and one of the devices, an iron maiden, plays a decisive role in the fight's conclusion.

Lunge, an actor I'd never encountered before, does nicely with his heroic role, but Palmer and Banks are the most magnetic performers. The funny girlfriend isn't very amusing, but there are a few good lines. An elderly cop is asked whether or not he can read, and he replies, "Not in the daytime. I took a reading-course at night school."

Posted by Gene Phillips at 2:56 PM
Email ThisBlogThis!Share to TwitterShare to FacebookShare to Pinterest
Labels: bizarre crimes and crimefighting (u), combative dramas, diabolical devices (u), the uncanny