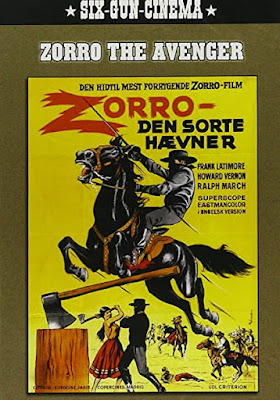 I have to assume that Disney's TV-iteration of the Zorro character must have hit Europe like a storm, given that Spain and Italy began churning out bushels of black-masked foxes. These two Spanish flicks were almost certainly shot back to back by director Joaquin Marchent, possibly with scripting by Jesus Franco on both. The two stories, both starring American actor Frank Latimore as well as most of the principal support-players, even shade into one another story-wise, which was not typical with most Zorro-opuses.

ZORRO THE AVENGER more or less follows the template of the original novel, even though the hero's secret ID is now "Don Jose de la Torre"-- possibly to avert Disney's lawyers? This time the local tyrant in an unnamed town in Spanish California is one Colonel Clarence (Howard Vernon, later a familiar face in Franco's films), who naturally reigns over his terrain with an iron fist. Don Jose emigrates from Spain, but there's not nearly as much interplay between Jose, his family, and his new girlfriend Maria as in the standard Zorro-tale. Much later, Jesus Franco would become notorious for his largely plotless films, where heroes just ran around having things happen to them, and so it may be his influence that makes both of these films rather vacuous, distinguished only by a few scattered sword-battles until the big climax. 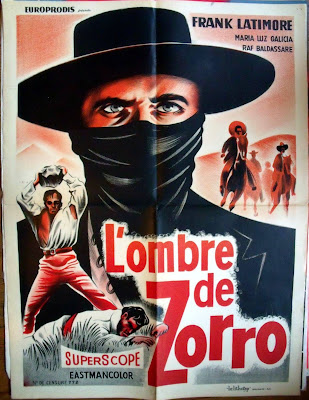 SHADOW OF ZORRO, which Franco may not have written, is a little more engaging in that Don Jose, now married to Maria, has retired his costumed persona. This resembles a similar development at the end of the first novel-- though Jose does not reveal his identity publicly, as does Don Diego.

But this state of affairs is doomed by the plot of two outlaw brothers with the un-prepossessing names of Billy and Dan. During Zorro's last crusade the hero slew the brothers' other brother, and now the siblings decide to seek revenge. One of them dresses up as Zorro and commits crimes, causing the authorities to start looking for the retired cavalier. In fact, to keep up connections with the first movie, one of the Zorro-hunters was trained in swordsmanship by the same teacher who taught Zorro's previous foe Colonel Clarence.

There is a little more attention to drama here, particularly whenever Maria whines about her hubby getting back into the hero game-- but that means that there's less action. Not that it really matters; both films are simple formula-fare, competently but unexcitingly rendered. As the above illustrations show, this Zorro was given a very simple costume with a bandanna-mask, again to avert Disney-suits-- but costume aside, Latimore's Zorro may be the least live-action Fox ever committed to celluloid.

Posted by Gene Phillips at 4:06 PM
Email ThisBlogThis!Share to TwitterShare to FacebookShare to Pinterest
Labels: combative adventures, outre outfits (u), the uncanny