HERCULES AND THE PRINCESS OF TROY (1965) 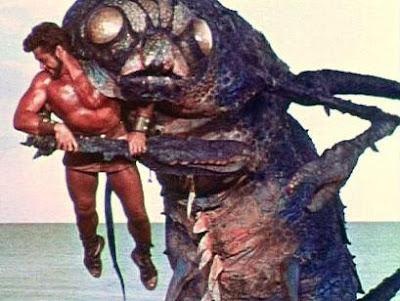 Without glossing over the fact that a lot of rinky-dink sword-and-sandal flicks came out of Italy, this Italian-American TV-pilot may be worse than most of them. One has to say this for the Italian makers of junky films: they almost never stinted on the action. Though the short movie (47 minutes) displays decent production values, the script seems to make every attempt to play down any potential for excitement. One can hardly believe that this was an early directorial effort by Albert Band, who at least turned out some decent time-wasters under the aegis of his producer-son Charles Band.

In Classical times Hercules was supposed to be dead by the time of the Trojan War, but here he's rubbing shoulders with Ulysses, a wise guy named Diogenes (probably not the philosopher), and a fellow with the un-Greek name of "Ortag." Had this become a regular TV show, Hercules and his buddies would have been sailing from place to place in their ship, "the Olympia," looking for wrongs to right.

For their first outing the heroes sail into Troy, and find that for many years the city has been menaced by a nearly invulnerable sea monster. To keep the creature from attacking the city, the locals have been chaining females sacrifices on the rocks near the coast, and now it's time for the city's reigning princess Diana (Diana Hyland) to give her all for her people. The basic imagery has been borrowed from the Andromeda myth, in which said princess is rescued by Perseus.

Since Hercules' battle with the monster-- something of a cross between a crab and a centipede-- will form the film's climax, the script has to kill time with some forgettable cloak-and-dagger plots, the introduction of a couple of invulnerable horses (who don't do anything), and Hercules getting trapped in a underground caisson. The battle with the monster is TROY's only selling-point, and since the creature FX (by Carlo Rambaldi) are very limited, this proves a letdown too. Gordon Scott shows off his usual quads and pecs but doesn't get a chance to put forth even the limited emoting seen in his other heroic roles.

Posted by Gene Phillips at 1:19 PM
Email ThisBlogThis!Share to TwitterShare to FacebookShare to Pinterest
Labels: combative adventures, the marvelous