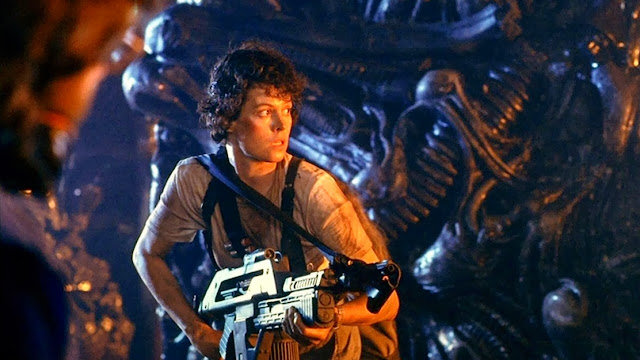 In my review of the 1979 ALIEN, I mentioned that the architects behind the Nostromo's secret mission-- the acquisition of a mature Alien-- seemed to be "the advocates of some ruthless futuristic military-industrial complex." One never knows the identity of the architects in Ridley Scott's film, and James Cameron's sequel takes place 57 years after that film, so understandably Cameron did not choose to follow that detail, despite all the other references to ALIEN in ALIENS.

This is understandable, since ALIEN's weakest point is its grand conspiracy, whose architects somehow know enough about the stranded E.T. vessel that (a) they want an alien specimen of their very own, and (b) to get one, they set up the Nostromo to voyage to the site of the vessel and to play Judas goat-- which proves to be a mistake, since one of the goats, Ellen Ripley (Sigourney Weaver), manages to slay the "lion." Ripley survives the destruction of the ravening alien and the Nostromo, submerged for 57 years in shuttle-cryosleep, until a salvage crew finds her and returns her to Earth. If there are any of the conspirators still rattling around, they're more than willing to stay hidden in the shadows, while Ripley takes the heat for blowing up a company-owned vessel, allegedly to destroy a hostile xenomorph.

The current administrators view her whole story with skepticism, especially since for the past 20 years a small terraforming colony has taken up residence on the "exomoon" where Ripley claims to have seen the derelict ship and its cache of alien eggs. Ripley's frustrations are increased by the fact that she's been in cryosleep so long that her only relation, a daughter who was young when her mother departed Earth, has died of old age. Ripley has nothing but the cat she saved from the Nostromo.

Then, by the divine fiat of authorial coincidence, a family on the exomoon comes across the ship-- and they're just the first to be assaulted by the alien swarm. The company is apprised that the colony has ceased communications, and so they send a squad of "colonial marines" to investigate. Company rep Burke (Paul Reiser) talks Ripley into coming along in an advisory capacity, and Ripley reluctantly agrees.

It's interesting that in both films one never precisely knows where the Earth's government stands in relation to both events, since the corporation that owns the Nostromo seems to be able to act without government oversight. Certainly when one hears the term "marines," one tends to think of a military force answerable to a central government. The default seems to be that the world of ALIEN and ALIENS is a corporatocracy. Nevertheless, whereas the human agents of ALIEN are just experienced interstellar crewmen with no military training as such, ALIENS has the corporation send its "best and brightest" into the hell of the alien breeding-ground, ostensibly to rescue the remnants of the colony-- though predictably Burke has his own agenda, to protect the company's interests above all else.

I want to resist any easy parallels between the events of ALIENS and America's cultural interpretation of the events of the Vietnam War (though it may not be total coincidence that one of the big moneymaking movies of 1985 was RAMBO: FIRST BLOOD PART 2). In any case, Ripley's experience with these space-jarheads is meant to evoke admiration for their skill and courage, even though they're out of their depth in this conflict. Her only ambivalence to the troopers is that one of their number is Bishop (Lance Henriksen), a "synthetic," whom Ripley reviles because he reminds her of the traitorous Ash. In contrast, Ripley bonds somewhat with Corporal Hicks (Michael Biehn). Biehn has a role in this film with a strong resemblance to his role as Kyle Reese in THE TERMINATOR, for in both films the Biehn character must pass on his martial skills to an inexperienced young woman, even though he himself will not survive the conflict.

ALIENS is meant to trump the first film by offering a veritable deluge of fiendish xenomorphs in place of a solo predator, and thus Cameron dials up the ultraviolence up to 10. Consequently, there's little of Ridley Scott's "wire mommy" womb-imagery here. Though the marines use a lot of ordnance fighting the evil E.T.s, one never has the sense of their being as dependent on their weapons as are the doomed crewpeople of the Nostromo. Of course, the marines are also marked for death, and as in the first film, Ripley escapes the conflagration with just one other survivor.

This time it's a human girl, Newt (Carrie Henn), only survivor of the family that found the derelict vessel. Newt is clearly a substitute for the daughter Ripley lost, and ALIENS still scores in terms of centering its conflict not in a duel between male fighters but between rival "mothers," as Ripley takes on the aliens' Queen Mother head to head-- even though here too, the vulnerable human being is obliged to use technology to fight the biologically superior, exoskeleton-equipped juggernaut.

Of the four ALIEN films in which Sigourney Weaver acted, ALIENS is the film that provides the greatest attention to her character. That said, even Cameron, with all of his action-girl feminism, knew that the Aliens were the film's selling point, and so I would say that the monsters remain the star of this show.

Posted by Gene Phillips at 1:42 PM
Email ThisBlogThis!Share to TwitterShare to FacebookShare to Pinterest
Labels: combative dramas, the marvelous