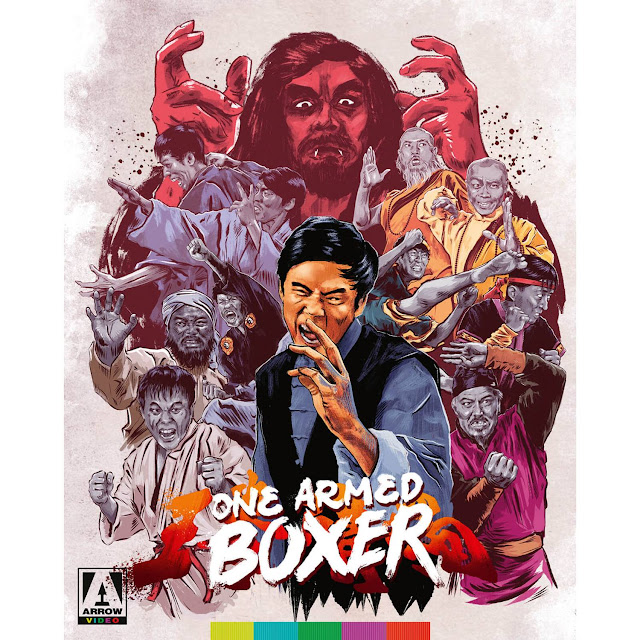 I've only rarely been impressed with the direction of Hong Kong "chopsockies" from the sixties through the eighties. Most of these entries favor flat, mid-range almost stagey shots of the principal actors, whether they're fighting a big battle or engaging in talking-head activity. Then I watched the two "One Armed Boxer" films back to back, both of which star Jimmy Wang Yu, probably due to his meteoric rise to stardom thanks to his performances in THE ONE ARMED SWORDSMAN and its first sequel.

While his acting may have contributed to his getting the director's job, in both of these films Wang Yu showed an impressive facility with many of the techniques pioneered in Western cinema-- quick cuts, well chosen close ups, and angled shots. I haven't seen any of Wang Yu's other directorial efforts, but will make the effort to check them out now.

Wang Yu also wrote six of the films he directed, but though the two BOXER films are well written compared to the usual fare, they aren't extraordinary in the script department. Both are set up to provide the put-upon hero with an array of bizarre enemies for a series of end-fights, though BOXER #1 takes much more time to built up the hero's special status.

The hero, Tien Lung by name, is one of many students at a dojo run by Master Hang Tui. He and his fellow students get into a fight with the students of a rival school, the Hook Gang. The Hooks' master, one Chao, is also a purveyor of such criminal activities as prostitution and opium dealing. That first fight escalates as the two schools quarrel (the main sociological element of the film). Finally Chao brings in several professional assassins, all skilled in different martial arts, to decimate Hang Tui and all of his students. Only Tien Lung survives, but only because one of the evil swordsmen cut his entire arm off.

Providentially, Tien Lung is rescued from death by an old pharmacologist and his lovely daughter Jade. Tien is naturally distressed about losing an arm, but he swears to carry out vengeance for his school somehow. Jade, already taken with Tien, appeals to her father, who gives Tien a rare drug, designed to amp up his strength to superhuman levels. Yet, in the movie's most memorable scene, the hero can only obtain this power by subjecting his surviving arm to a burning torture. This practice is familiar from many kung-fu films, and seems to convey the notion that practitioners of the arts can gain great powers through acts of self-abnegation.

The transformation takes place, and soon Tien is seen smashing stone objects with his lone fist. Conveniently enough, all of Chao's assassins have remained in the vicinity, and Tien announces his quest for vengeance by slaying two of them. Chao summons Tien for a showdown at a rock quarry and the hero faces down all of his enemies. I didn't get much sense that Tien's fabulous strength played that much of a role in the battles, with one exception. The scene in which the Hang Tui students were slaughtered portrays a Hindu assassin who tries to disconcert enemies by walking on his hands when he fights. The method by whichTien counters the Hindu at the climax is one of those of those deliriously crazed events for which the kung-fu devotee lives to ferret out.

The quest for vengeance is the only real drama in the story, and despite some suggestions of romance Jade doesn't appear in the sequel. However, two of the assassins whom Tien slays are utilized to set off the action for the sequel-- a rare example of strong continuity in any series of HK martial arts films.

Posted by Gene Phillips at 2:54 PM
Email ThisBlogThis!Share to TwitterShare to FacebookShare to Pinterest
Labels: combative adventures, the marvelous