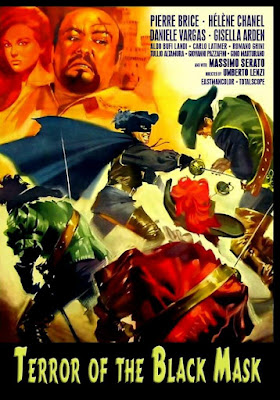 Director/co-writer Umberto Lenzi, later famous for horror and suspense films, some of which I reviewed here, originally made his bones directing historical spectacles, among them two Zorro-like films made back-to-back with headliner Pierre Brice and various other personnel in common.

The first film, styled THE INVINCIBLE MASKED RIDER in Italy and TERROR OF THE BLACK MASK in the U.S., never actually calls the black-clad protagonist "Zorro," though in his regular ID he sports the name "Don Diego." However, both this adventure and the next one are set in something like 17th-century Spain, so the Old West associations of Zorro are abandoned. (As it happened, star Brice became less famous for his European Zorro than for playing a character adapted from the Old West novels of German author Karl May.)

The Black Plague threatens the Spanish province ruled by tyrannical Don Luis (Daniele Vargas), but Luis doesn't let a little thing like rampant disease stop his quest for power. He decides that he wants to consolidate his control over the local nobility, and to do that, he wants to bring young Carmencita (Helene Chanel), sole daughter of the wealthy Gomez family, under his aegis. His first step is to hire assassins to slay Carmencita's father before her very eyes, which makes it possible for Luis to make the young woman his ward. There are a couple of lines in which the older don considers marrying Carmencita himself, but he tells his associate that he thinks it better to marry the woman off to his "foster son" Diego. Nothing is said about the circumstances under which Luis adopted Diego, but the two of them haven't seen each other in many years, so it's likely that Luis's foster-father status was also set up to yield a political advantage.

Like the Don Diego of the ZORRO stories, the young man comes to court pretending to be a harmless fop. Naturally, that's because he plans to don an all-concealing black costume and work to overthrow his foster father's evil reign. As in most Zorro iterations, the lead female scorns the fop but becomes infatuated with the virile masked man who fights injustice. The script does come up with a minor twist, for at the climax Diego reveals that he's not the foster son of Luis. That individual died of the plague, and the Masked Rider, who was seeking some way to unseat the evil Luis, took the place of the foster son with the help of his underground of freedom fighters.

The menace of the plague provides the only element that doesn't seem lifted from a standard Zorro adventure, and it's interesting that in one scene some citizens briefly call the unnamed cavalier "the Black Death." A possible derivation from the tropes of Poe's "Red Death," translated into swashbuckler terms? However, later on he's usually called just "the Masked Rider," so if that idea occurred to anyone, it was not sustained. 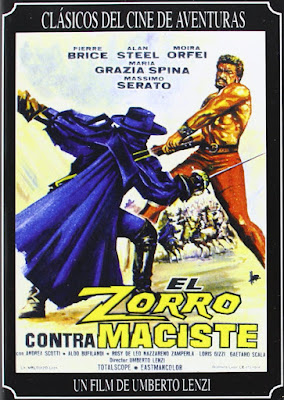 The second film takes place in the same basic setting, and the script does call its hero Zorro in the subtitled version I saw, though in some markets he was renamed "El Toro." This time there's not much attention to how Zorro came into being, and his secret ID is Ramon, a poet but not specifically a fop. Both of his identities are in love with a totally different woman, Princess Isabella (Maria Grazia Spina). Isabella and her cousin Malva (Moira Orfei) are both potential heirs to the rulership of the realm after the natural passing of their uncle, the previous lord. But Malva is as villainous as Isabella is virtuous, and she plots with her aides to intercept the will of the former lord, so as to manipulate her ascension to the throne. To this end, Malva hires a passing strongman, Maciste (Alan Steel), to do some of her dirty work. This leads to a contretemps between Zorro and Maciste, though their enmity is short-lived when the fundamentally good-hearted Maciste finds out that Malva is an evil schemer.

In this film Lenzi takes full advantage of all the brawl-happy tropes of the muscleman film, making for a more enjoyable romp, not only with the usual scenes of Maciste tossing guys around, but a face-off between the two heroes, in which Maciste tries to clobber the sword-wielding swashbuckler with a big club. On the minus side, Orfei doesn't get any really good scenes; like her good-girl cousin, she's mostly seen just standing around in ornate gowns. Orfei does get one moment in which she fantasizes about punishing the turncoat Maciste with torture, but that's about it.

As with most films centered upon Italy's popular Maciste character, this one had the muscleman character renamed for the American market. The new title was "Samson and the Slave Queen," but not only does Maciste have nothing "Samson-like" about him, neither of the candidates for queen-dom are involved in enslaving anyone. I assume that this cool little crossover flick made some money, for a few months later, another film with similar elements made it to screens a few months after ZORRO/MACISTE. As I noted in this review, HERCULES AND THE MASKED RIDER again brought together a Zorro-like crusader (not surprisingly, with yet another separate background) and a strongman. However, this time the swordsman-- reverting to the name "Masked Rider" in the dubbed version-- becomes the center of the story, and the strongman-- called "Goliath" in the Italian original and re-dubbed "Hercules" for the English speaking market-- plays the stooge to the costumed cavalier. Alan Steel once more played a strongman figure here, but neither Lenzi nor Brice were involved, and the film is poorer for their absence.

Posted by Gene Phillips at 4:09 PM
Email ThisBlogThis!Share to TwitterShare to FacebookShare to Pinterest
Labels: combative adventures, outre outfits (u), superlative skills (u), the uncanny