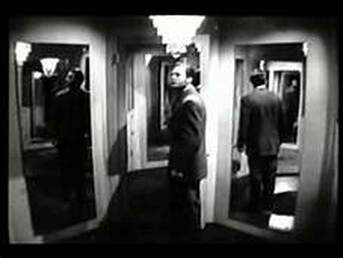 I have not read the original Cornell Woolrich short story on which FEAR was based, which proved durable enough not only for an official remake but also for numerous TV swipes. Thus I don't know if, in the original story, the mystery's solution involves the main element that makes the film metaphenomenal: a hypnotist who essentially stage-manages the protagonist's involvement in crime. (I did say SPOILERS!)

I've noted in other reviews, like this one, that hypnotism can be used either naturalistically or with an uncanny vibe, and the use in FEAR strikes me as the latter. The weird dream that the confused Vince Grayson (DeForrest Kelley) experiences, though, could have gone either way, since the movie's basic setup is that Grayson really experienced his fight with and murder of a stranger in a mirrored room.

Nevertheless, that opening murder-dream is easily the film's most riveting moment. Afterward, though, FEAR settles down into a series of pokey talking-head scenes, mostly with Grayson trying to get to the bottom of things with the reluctant help of his cop brother-in-law (Paul Kelly, who had earlier played the Black Commando in 1942's THE SECRET CODE). Though this was De Forrest Kelley's cinematic debut, he doesn't have much to do but bumble around looking confused, a hapless cog in someone else's machinations. Other films noirs used such characters to plumb the depths of psychological insecurity, but Grayson is something of a blank slate, so Kelley can't do much with him.

Kelley was something of "the baby" on this shoot, since Kelly, villain Robert Emmett Keane, and writer-director Maxwell Shane all had credits going back to silent days. Shane was much better known for writing than for his relatively brief directing career, and his only interesting metaphenomenal credit was Bela Lugosi's ONE BODY TOO MANY.

Posted by Gene Phillips at 2:02 PM
Email ThisBlogThis!Share to TwitterShare to FacebookShare to Pinterest
Labels: delirious dreams and fallacious figments (u), enthralling hypnotism and illusionism (u), the uncanny