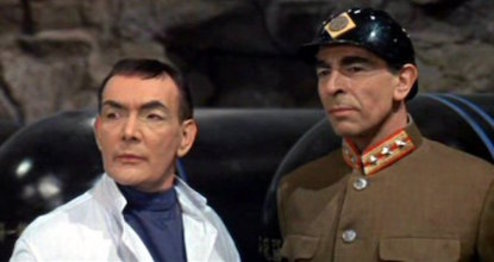 BATTLE BENEATH THE EARTH has such a delirious basic concept that I almost wanted to award it the status of "good mythicity" based on that alone. Said concept seems to be an extrapolation of the cartoon joke where some character hits the ground so hard he ends up in China. In this case, however, the Chinese decide they're going to tunnel up to our hemisphere and not just invade the West, but reduce it all to nuclear rubble.

The opening is a grabber: in a major American metropolis (which never for a moment looks like anything but Great Britain), the cops get called about a "listening incident" The disturbance is caused by geologist Arnold Kramer (Peter Arne), who lies on the sidewalk pressing his ear to the concrete and claiming he can hear some mysterious intruders crawling around underneath, like "ants." Understandably, the cops take Kramer to the funny farm. However, by good luck Kramer's acquaintance Jonathan Shaw (Kerwin Mathews) visits the supposedly insane man, and Kramer's rants acquire meaning for Shaw when Shaw realizes that there have been some inexplicable seismic events, one of which devastated an underwater military project of Shaw's.

After many, many scenes of humdrum talking heads, with characters who can barely be distinguished from one another (and none of whom seem American, save Mathews), the military comes to the inevitable conclusion: mysterious forces are tunneling up from the Orient. Reconnaissance reveals an even more horrible truth: that the invaders, Chinese Communist soldiers led by a renegade general, have come with a supply of nuclear bombs. Despite the threat, the "American" army doesn't want to send more than small expeditionary forces down into the tunnels, which certainly works out for the low budget of this thriller. In one of the later expeditions, Kramer, Shaw and various soldiers journey first to Hawaii to pick up a lady spelunker , Tila Yung (Columbian-English beauty Vivienne Ventura) to help them navigate beneath the earth. The mission seems to be to blow up the invading forces before they can do the same to the West-- and with their own nuclear explosion, no less. Definitely a case where "tit for tat" probably wouldn't work out too well for the fellow passing out "tit." 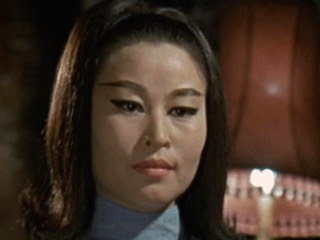 Going by the Oriental sound of Tila's name, I'm tempted to believe that the only reason she's introduced-- given that she does little that affects the plot-- is to show the "Americans" as being able to enlist "an Asian of their very own." Ventura doesn't look the least bit Asian, but she's in good company, since almost all of the other "Chinese" actors are played by Caucasian Brits, including the renegade leader General Chan Lu (Martin Benson)-- which casting decision makes BATTLE look even more absurd. There's only one genuine Asian in the cast: Paula Li Shiu, playing a character with a non-Asian name, "Doctor Arnn," which sounds exactly like the last name of the actor playing Kramer. She's the only woman working with the Chinese invaders, and her sole function is to be their resident brainwasher. It just so happens that a brainwasher is needed after Shaw's expedition is captured by Chan Lu, and Arnn seems in her small way to incarnate that Occidental fear of being mind-controlled by all the clever Orientals seen in pop fiction from Fu Manchu to THE MANCHURIAN CANDIDATE.

However, Shaw's imprisoned forces escape, and even though Tila hasn't been much use in consulting, she gives a fair account of herself in battle, stabbing two invaders to death. The action scenes as filmed by Montgomery (TERRORNAUTS) Tully aren't organized enough to qualify for the combative mode, and quite frankly I was never that invested in the struggles of the heroes, precisely because there's hardly anything but accents to distinguish one from the other. Since the menace of the tunneling terrors seems to get most of the narrative emphasis, I would say that this SF-thriller is structured more like a straight horror film, where the insidious monster is the star of the show.

Posted by Gene Phillips at 2:03 PM
Email ThisBlogThis!Share to TwitterShare to FacebookShare to Pinterest
Labels: the marvelous