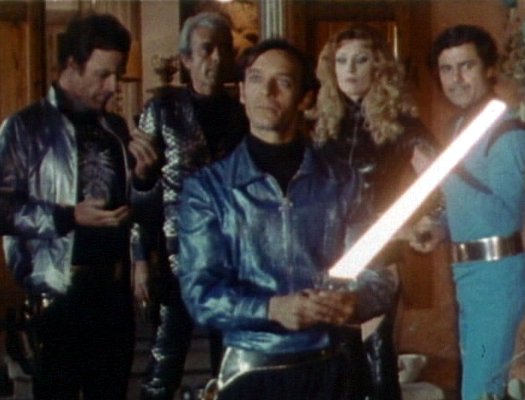 For some reason, I happened to look at a 2012 review I did for two Italian SF-schlock-fests, and I thought that I did a poor job explaining why the second film, STAR ODYSSEY, was crappy. So I re-watched the film on streaming. I wasn't expecting to find anything meritorious in ODYSSEY-- the last-released of four such schlock-fests directed by Antonio Brescia. But I thought that if I ever get round to citing it for THE GRAND SUPERHERO OPERA, I should have something more substantial to say about it.

Here's what I originally wrote, along with an addendum written a little while later:

The most one can say of COSMOS: WAR OF THE PLANETS is that it was probably conceived prior to the success of STAR WARS, so there's few Lucas-isms here.  In contrast, the insanely bad STAR ODYSSEY has all the requisite borrowings-- cute robots, laser-looking swords, and a daring Harrison Ford-like hero.  But where COSMOS at least moves along well, ODYSSEY bogs down from the first and never picks up.

Avoid except for "so bad it's good" parties.

ADDENDA: I should be a little more specific about the way in which STAR ODYSSEY "bogs down."  I don't mean that it's dull in the sense that nothing happens, but that it's dull because stuff is happening all the time, but none of it adds up to anything.  One hears about some film-shoots where the writers are literally making up the script as they go along.  This tendency may be aggravated in many special-effects films-- even those with little money behind them-- because their makers are always trying to whip up visual scenes that may "grab" the audience.  Brescia and his screenwriters have clearly seen STAR WARS, but they don't seem to have apprehended that the strength of its narrative drive.  ODYSSEY feels more like a knockabout comedy, in which one goofy stunt happens after another.  Appropriately, the only characters who seemed consistent as characters-- even though they were still not very interesting-- were two comic robots.  In a very *tiny* show of originality, Brescia's robots aren't *exact* clones of R2D2 and C3PO.  Instead they're a robot husband and wife who constantly carp at one another throughout the movie.  Again, they weren't good-- but I can remember them a little better than the copies of Han Solo, Princess Leia and Darth Vader.

So, upon watching ODYSSEY again, what more is there to say?

The main plot consists of an unprovoked attack on future-Earth by unidentified invaders (more described than shown). Later the commander of the enemy forces is Lord Kes, who possesses vague mental powers and who looks like someone pressed a waffle-iron to his face. (I thought of this before reading the same description on an MST3K site.)

Somehow Doctor Maury (Ennio Balbo), the resident genius on Earth (who also has vague psychic powers), determines that the enemy ships are made of the metal "indirium," and that therefore Earth can only prevail if they concoct "anti-indirium." To that end, Maury and his niece Irene assemble a team of rag-tag reprobates to run around on missions that, in theory, have something to do with mounting a defense for Earth. As noted above, this is just an excuse for a lot of knockabout fights, one of which involves some of Maury's agents breaking some others out of space prison.

The strange thing about this imitation STAR WARS is how little attention Brescia devotes to the young heroes. The biggest name in the cast is Gianni "Sartana" Garko, playing a Han Solo clone with the halfway-amusing name of Dirk Latimer, but he has no real memorable moments even though he can do mental Jedi mind-tricks. The females are a little more liberated than in many Italian space-operas-- a blond chick deals out a karate chop and Irene wields what's supposed to be a cheapjack energy-sword. But all of the heroes are designed to do nothing more than run around having pointless fights with Kes's very small army of blond-haired golden robots. ODYSSEY gives most of its character-moments to acerbic Doctor Maury, who *might* be a minor shout-out to the grey eminence of acerbic Doctor Benson in 1961's BATTLE OF THE WORLDS.

And that's all I found in my second viewing of STAR ODYSSEY. As before I affirm that the two comical robots are the best thing in the movie-- and you know that you're on Bizarro-Earth when the best thing about an Italian space-opera is its comedy relief.