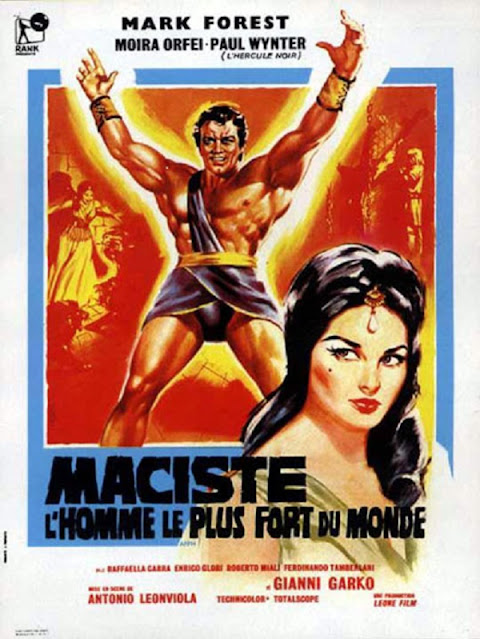 Phenomenality first: the main reason this Maciste movie-- in which the "Son of Hercules" is actually called by that name, or something close to it-- qualifies as "marvelous" is because it posits a race of humans living underground who have become albinos allergic to the sun's rays, just like in 1956's THE MOLE PEOPLE. Without that element, almost everything else would fall into the domain of the uncanny-- though I must admit that the climactic destruction wrought by Maciste (Mark Forest) and his Black Bestie "Bangor" comes pretty close to the marvelous.

Wherever the story takes place, both White and Black tribes live in the vicinity, since the Mole Men-- initially all albinos clad in white-- raid slaves from both groups. Maciste interrupts one such raid, saving Bangor (Paul Wynter) from captivity. Despite being just as hefty as Maciste, Bangor's not too keen on following the raiders into  their underground lair, but Maciste talks him into it.

Down in the subterranean caves, the Mole Men-- no albino Mole Women are in evidence-- are ruled by a grandiose but discontented queen, Hallis Mojab (Moira Orfei). Despite being queen, Hallis's main destiny is to turn out another generation. The smarmy high priest (Gianni "Sartana" Garko) keeps nominating his son for the job, but Hallis isn't too fond of that idea.

The viewer is also shown the reason for all the slave-taking: a mammoth mill-wheel that the mole-people need lots of slaves to turn, in order to churn out "gold and diamonds." I suppose the mill is supposed to be a colossal mining-device. Yet, given that the Mole Men don't seem to be trading with other countries, one wonders what good they get out of gold and diamonds. Maybe they're just symbols of wealth? And the mill is so titanic that I tend to associate it with the magical mill of the Finnish sorcerers of the KALEVALA-- though I suppose the Biblical "Samson at the Mill" trope is the more likely influential.

Then Maciste and Bangor barge in, wanting to liberate all the slaves, starting with a local princess. For once the innocent princess does not become a romantic interest for the main hero-- she gets fobbed off on some minor side-character-- and even old Bangor gets to chat up a cute Black girl-slave in the court. For once, though, the hero's exclusive love-interest is the domineering queen-- and also for once, the guy doesn't look like he's entirely unwilling to hook up with the gorgeous tyrant, in exchange for liberating all the slaves.

However, the high priest interrupts the love-talk by coming in like a lion-- or, more specifically, he lets a real lion in on the couple. This naturally breaks up the party, and Maciste decides to concentrate on restoring the princess to her people first. Having done that, he returns to the underworld to see what he can do for the other slaves. Hallis doesn't know his intentions, though, so she goes above ground, intending to personally kill him.

This skillful division of the romantic characters allows for two good effects. While Hallis is above ground, her retainer belatedly reveals that she has nothing to fear from the sun, because she's not of their mole-ish blood. The Mole Men also stole her as a child and placed her on the throne for reasons unknown, possibly just as breeding stock. This is a thunderbolt revelation for Hallis, who's long desired the freedom of the above-ground world-- which she only gets to enjoy for a short time before she's overtaken by cruel fate.

Back down below, Maciste and Bangor liberate various slaves and start a revolt. They finally decide that they need to break the power of the Mole Men by destroying the big mill that makes the slaves useful-- and the two muscle-men do so by forcing the mill against its grooves until its central pillar shatters-- one of the most fascinating FX-scenes in sixties peplum cinema.

This one has some moments of rough poetry, but sadly, not quite enough to elevate it to the level of a similar sword-and-sandal like THE GIANT OF METROPOLIS.

Posted by Gene Phillips at 2:06 PM
Email ThisBlogThis!Share to TwitterShare to FacebookShare to Pinterest
Labels: combative adventures, the marvelous