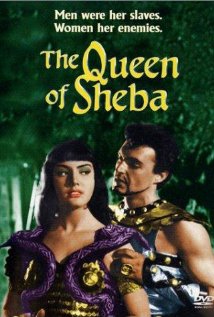 This Italian production, probably a response to the success of America's 1951 historical drama QUO VADIS, QUEEN OF SHEBA is a quality production for the time, a far cry from the sort of formula peplum-films that later dominated Italy's output of historical adventure. Ironically, SHEBA's director was Pietro Franchisi, the same guy who helmed the first two HERCULES films, which rebirthed Italy's "cult of the muscleman hero" by introducing world audiences to the biceptual charms of Steve Reeves.

Since the Judeo-Christian tradition only provided meager information about the titular Queen, aside from the fact that she journeyed to Israel and became one of King Solomon's wives, the film's writers, one of whom was Francisci, felt free to rework these bare bones into a more substantial skeleton.

Solomon is a side-character here, seen at the beginning rendering his famous "cut the kid in half" judgment to suss out the child's true parent. But the king's greater concern is with the kingdom of Sheba, ruled by Balkis (Leonora Ruffo), a fierce warrior-queen who threatens Israel's security. Solomon sends his handsome son Rehoboam (Gino Leurini), along with one other warrior, to Sheba to spy on the enemy's intentions. Because the country of Balkis isn't fond of foreigners, the two Israelities masquerade as emissaries from Gath, an ally to Sheba.

Though the two men have no real means of accessing the court of Balkis, they have the good fortune to find themselves up close and personal with the queen herself when they happen upon her bathing at an oasis. There's immediate chemistry between the queen and the Israelite, for all that he's left a nice Jewish girl back at home (making Rehoboam one of the first movie-Hebrews to lust after a foreign girl, without being punished for it). The spies learn that the leader of Balkis' army, one Kaball, wants to make Balkis his bride, but by tradition Balkis is forbidden to marry, being consecrated to the god Shamash (native to Babylon, actually). A prophecy contains the key to Balkis' release, which can only occur "when the mountain speaks."

Various intrigues transpire, including Rehoboam and his buddy visiting a place of low repute, though the only thing that happens is a big wrestling-scene and a near-duel between the hero and Kaball. Balkis finds out that the man she now loves is an enemy spy and Rehoboam flees back to Israel. If Balkis wasn't planning to attack Israel before, her busted heart leads her to attack the Hebrew sanctum with all of her forces.

Since the traditional Queen of Sheba was not a warrior-queen, I wondered how far the movie would go in rewriting this version of the legend. Not only does Balkis lead her troops into battle, she even disguises herself as a male warrior so that she can personally try to execute her former lover, leading to a swordfight (in which Rehoboam somehow doesn't notice her feminine attributes). The hero defeats the heroine without killing her, and afterward wise Solomon releases her-- which in a roundabout way leads to a more traditional guy vs. guy duel when Kaball tries to master Balkis and Rehoboam comes to her rescue. Then the prophecy gets fulfilled, for during the guy-fight Balkis shouts the hero's name, and this causes the mountain to "speak," as her voice echoes and causes an avalanche that kills Kaball-- and incidentally, makes possible a marital alliance of the two kingdoms. (In the Old Testament, Rehoboam-- who is the son of Solomon by one of his other wives-- actually goofs up and allows Israel to fragment into two nations, one of which is the northern kingdom of Judah.)

A minor note is that in one scene, Balkis is accompanied by a retinue of leopard-skinned warrior-women called "Amazons," but they're seen so briefly that they don't contribute to the trope of "exotic lands and customs" as does the mysterious fulfilled prophecy.

Posted by Gene Phillips at 3:45 PM
Email ThisBlogThis!Share to TwitterShare to FacebookShare to Pinterest
Labels: combative adventures, exotic lands and customs (u), the uncanny