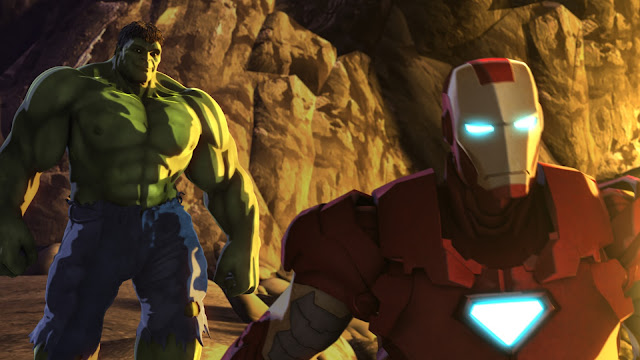 Most of the original animated DTV movies made from Marvel comics-characters have been relentlessly mediocre, in contrast to the DC cartoon-films, which generally vary between the excruciating to the excellent. To be sure, in the 2010s Marvel cartoon serials have probably been better than those from DC, but often the stand-alone animations can't quite seem to capture the soap-operatic appeal of Marvel characters (though the live-action movies have similar problems there, as well).

Still, this time out the "brave and bold" teamup of Iron Man and The Hulk works much better than one might have expected. Naturally, these characters are extrapolated from the live-action Marvel movies, wherein the regular identities of both super-crusaders-- namely, Tony Stark and Bruce Banner-- become science-buddies. Refreshingly, though, UNITED goes in a less predictable direction, in that I don't even remember Banner being mentioned.

At the start of the opus, the two heroes have served in The Avengers together, but Iron Man doesn't really have any sort of buddy-relationship with Banner's green-hued id-monster. However, UNITED is the story of how the two of them work through their differences in order to take arms against a sea of troubles.

The troubles, of course, are an assortment of Marvel villains, though most of them-- the Abomination, the Wendigo, and a couple of Hydra scientists-- don't do much more than set up the plot-action. The nub of the conflict is that Iron Man and Hulk get trapped aboard one of Stark's ships, which in turn falls under the control of a new version of a Hulk villain: Zzzax, a sentient electrical entity. Whereas the character in the comics just goes around shocking people, this Zzzax is pretty adroit about using his powers to over-write electronic programs with an eye to controlling the world's energy. The monster even has some minor characterization, slamming Earth's humans for wasting energy.

The action is pretty good-- Hulk is blinded at one point and has to depend on Iron Man to be his eyes as they fight a Stark-created band of robots called "Mandroids." But the barbs that the two heroes toss at each other while trying to beat their enemies are the short movie's highlight, and for once, the limited animation wasn't a huge problem.

Posted by Gene Phillips at 3:04 PM
Email ThisBlogThis!Share to TwitterShare to FacebookShare to Pinterest
Labels: combative adventures, the marvelous