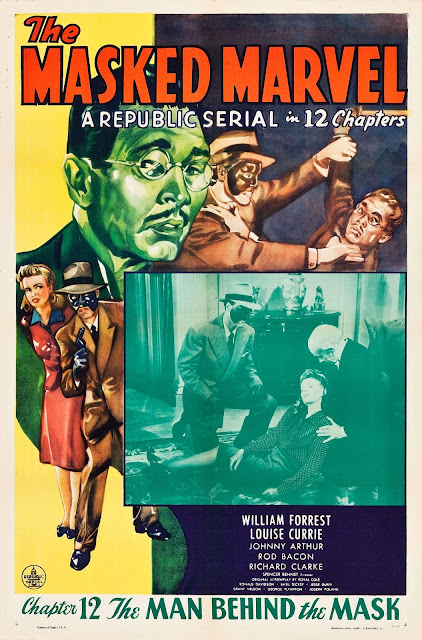 What was the deal with all the two-fisted "insurance investigators" one finds in serials of the Classic Period? Maybe there aren't really all that many, since I've not actually sat down and counted them up. But even one seems like a deviation from what I understand as the standard duties of an insurance investigator. Maybe a fair number of hardboiled detectives get into trouble while taking cases for insurance companies, but I don't think real investigators get involved in tracking down foreign saboteurs. In fact, MASKED MARVEL is so intent on playing up the role of insurance operatives that the script tosses out the detail that the head saboteur, Japanese spy Sakima (Johnny Arthur), had also for a time posed as-- guess what-- "the Tokyo representative of the Worldwide Insurance Company." Did Republic Pictures, who filmed MARVEL, have some idea of flattering the insurance guys on the sets, so that they'd turn in favorable reports?

At any rate, maybe on the theory that it takes four insurance guys to track down one of their own kind, four such operatives are sent to quell the sabotage. (Ask the U.S. government to intervene? Don't be silly.) In addition, from the get-go the mysterious masked "undercover agent" known as The Masked Marvel is also on the case, and only Alice (Louise Currie) knows that the costumed crusader is one of the four men. This "whos' the hero" trope was probably borrowed from Republic's 1938 LONE RANGER serial, but it didn't work that well there, and it works even less well here, given that the script doesn't develop the four insurance guys as characters in their own right. Moreover, the performer who's actually in the Marvel's mask for almost the whole serial is stuntman Tom Steele, who looks bigger and rangier than any of the four supposed candidates for his "true identity." Steele is largely responsible for the success of MARVEL's main asset-- the high-octane hand-to-hand fight scenes-- but for whatever reason, Republic gave the performer no billing, not even as stunt coordinator.

Instead of the more familiar trope of having the villain and hero chase one another as they pursue some weapon, here the plot consists of the investigators trying to block one of Sakima's sabotage-plots, at which point the Masked Marvel takes over, either fistfighting against or shooting it out with Sakima's hoods (including head henchman Anthony Warde in his standout "tough guy" role). Once or twice Sakima tries to find out who the Marvel really is, and I suppose it's because he feels that if he nullifies the costumed hero, none of the other mooks will be capable of thwarting him. Sakima, BTW, is one of the more memorable serial-villains, in that in his every scene he oozes total devotion to America's destruction, without quite edging into the territory of chauvinistic anti-Asian sentiment.

For the most the only metaphenomenal element in the serial is the Marvel's uncanny attire. However, in one chapter Sakima is out to sabotage a new submarine device, based on "the principle of television," that would allow a sub to fire on targets without having to send a periscope above the waves to scope things out.

Posted by Gene Phillips at 2:43 PM
Email ThisBlogThis!Share to TwitterShare to FacebookShare to Pinterest
Labels: combative adventures, diabolical devices (u), outre outfits (u), the uncanny