VOYAGE TO THE PLANET OF PREHISTORIC WOMEN (1968) 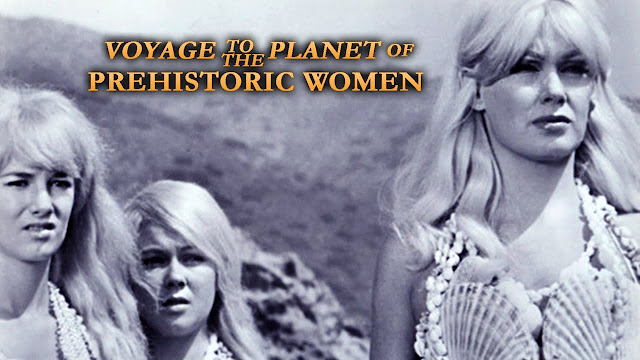 I don't know why producer Roger Corman thought it expedient to rework footage from the Soviet space-film PLANETA BURG into this film, since three years earlier he had already used largely the same footage for VOYAGE TO THE PREHISTORIC PLANET. Of the two, the first is probably much closer to the serious intentions of the Soviet original, devoting quite a bit of discussion to the evolutionary parallels between Earth and the "prehistoric planet" of Venus. Possibly the first film didn't justify Corman's expense in having bought the Soviet film, so he sought to recoup his investment by putting old wine in a semi-new bottle. Peter Bogdanovich recollected that  Corman wanted him to shoot about ten minutes of new material, all shots of Mamie Van Doren and other women in clamshell-beach attire, because Corman claimed AIP wouldn't take the film without some comely women in it. The truth may just be that Corman thought that more babes would mean more bucks at the box office.

I confess that when I saw this film on television as a teenager, I found the narrative pretty incoherent, but I was still taken with the romantic theme, one that largely overshadows the scientific content. The 1965 reworking included a subplot in which one of the Earth-explorers hears what I described as a "feminine siren-call" from some unseen but intelligent Venusians, but this subplot doesn't noticeably affect the narrative. WOMEN plays down the stuff about evolution and concentrates on sex, most notably by having the astronaut provide a voice-over about his sense of longing for the Venusian female with whom he has some strange affinity. Since no actors portraying astronauts-- whether original Soviet performers or American inserts-- share any scenes with the Venus-women, the voice-over succeeds-- better than anything else in the film-- at getting across the narrator's lovelorn status.

The basic image of beautiful blonde Venusians walking around the beaches of Venus-- in shoes, no less-- is risible on the face of things. Yet  Corman's commercial instincts tapped into a familiar image of science-fiction worlds inhabited by alluring females. The archetypal effect is almost certainly accidental: the men of the expedition are all about science, dispassionately studying all the scientific phenomena of Venus. When a Venusian version of a pterodactyl attacks them, they simply kill it. When Robot John-- whose appearance here is far less compelling here than in the 1965 reworking-- goes berserk, the guys just abandon his metal ass to the lava.

Despite some iconic similarities to Greek sirens, the Venus-women, however, are all about religion. They worship the pterodactyl-- given the equally risible name of "Ptera". Both the living creature and its graven image appeared in the 1965 reworking but didn't have any great impact on the narrative. Once the Venus-girls are inserted, they have a more direct effect on the story. They want vengeance for the death of their god, so they use their powers-- presumably telekinetic in nature-- to set off natural disasters that harry the explorers. Presumably the lovelorn astronaut is in mental communication with one of the Venus-babes who's not so hostile to the newcomers, but the new footage doesn't spell out just which Venus-girl the Earthman's in contact with. When the astronauts manage to survive all the crap thrown at them-- all without knowing that their mishaps have been purposefully directed-- the women's leader Moana (Van Doren) suddenly decides that the fault lies not in themselves but in their false god Ptera, and orders that her subordinates tear down Ptera's graven image. If the Venus-babes incarnate the trope of "female worlds lusting to be conquered," this trope-- the rejection of paganism for some more advanced religion-- proves complementary in a somewhat artless fashion. The astronauts leave Venus without ever knowing that they've fomented a religious crisis, and one wonders what kind of "true religion" the siren-girls will come with. At the closing, the narrator hopes that he'll be able to return to Venus some day. Maybe he'll come back to a world where the girls-- who may be parthenogenic since they have no men around-- have erected a statue of him?

The 1965 film inserted some new footage with American stars Basil Rathbone and Faith Domergue, and other online reviews have noted how the Domergue character's name "Marsha" is improbably recycled into the name of a space station or something like that. Van Doren is the only American star in this offering, and none of the other girls went on to even minor Hollywood careers. While at the height of Van Doren's career she was known mostly for playing brassy, lusty modern women, Bogdanovich's photographic skills succeed in giving her natural beauty a haunting quality rarely witnessed in the actress's other movies, either before or after VOYAGE.

Posted by Gene Phillips at 12:25 PM
Email ThisBlogThis!Share to TwitterShare to FacebookShare to Pinterest
Labels: the marvelous