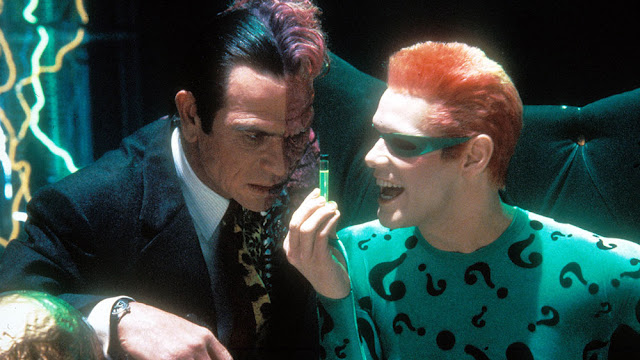 What's the best thing I can possibly say about BATMAN FOREVER, a stinky sequel that makes SUPERMAN IV look highly professional by comparison?

How about "it manages to be bad simply by virtue of the producers' intrinsic dumbness about superhero films, and not because it's trying to inject crappy political content into the mix?"

That, and the fact that Kilmer's Bat-suit doesn't look as much like a tank as did Keaton's. This allows Kilmer's Batman to engage in a few fluid fight-scenes that were an improvement on most of those in the two Burton films.

FOREVER is not a bad Bat-film simply because it doesn't give viewers the "grim-and-gritty" version of the hero seen in the Burton films. Given that director Joel Schumacher was charged by his producers with making Batman more "kid-friendly," it was possible that he might have come up with some valid take on the "camp Batman" of the 1966 TV show, or even the similarly outrageous Bat-comics of the Silver Age, which I tend to refer to as "Candyland Batman." Certainly Schumacher chose to make his Gotham a bright and scintillating landscape for the most part, and at least one of his two chosen villains, The Riddler, would have fit into this milieu much better than the most current version of the Prince of Puzzles.

The trouble is, though, that even a more light-hearted Batman is not an excuse to just crank up the visual effects and let the story go to hell. Michael Bay, who in the same era was making splashy action-fare like BAD BOYS and THE ROCK, even displayed a greater sense of narrative storytelling than Schumacher does here.

The basic pattern of the FOREVER script, to be sure, could have been copied from a lot of bad Bat-comics of the Golden and Silver Ages. Villain strikes at society. Hero stops him but villain gets away. Rinse and repeat until the villain gets caught. But a stand-alone movie needs more than a repetitious storyline and glossy FX. The so-called script was a collaboration between a married writer-team, the Batchelers, who hadn't done much before or after FOREVER, and Akiva Goldsman, who had worked with Schumacher on the successful film THE CLIENT. Given that Goldsman went on to perpetrate such awful scripts as those of BATMAN AND ROBIN and LOST IN SPACE, I choose to blame him alongside Schumacher for pissing on the Bat-mythos.

Whereas BATMAN RETURNS found a tolerably logical reason for the film's versions of Penguin and Catwoman to work together, Goldsman can't be bothered to create any real characterization for either the two villains, Riddler (Jim Carrey) and the incredibly awful choice of Two-Face (Tommy Lee Jones). The latter does not really belong in the world of Candyland Batman, he's "grim and gritty" at the core, even if he occasionally appears in some more light-hearted cartoons. Riddler and Two-Face have no plausible reason to work together.  For one thing, Riddler is a complete noob in this script, with no criminal rep whatever, so Two-Face-- even granting that Jones plays the role like a manic version of Nicholson's Joker-- seems not just crazy but stupid for accepting the green-clad goofus into his confidence. Additionally, while Carrey can be forgiven for giving the audience a hyper-kinetic Riddler, given that this was what the actor was known for, but Jones clearly has some idea of stealing Carrey's scenes, and thus every scene they share is an ordeal akin to having teeth pulled without anesthetic.

And then there's Val Kilmer's Batman. I suppose he makes some attempt to give the Caped Crusader a little gravitas at times, and at times he succeeds. But the spoofy dialogue often undermines the actor, particularly in Kilmer's first appearance in Bat-garb within the film. The hero is called in to prevent Two-Face from killing innocents, but Goldsman is so desperate to get in his funny lines that during this sequence both Kilmer-Man and his new love interest Chase Meridian (Nicole Kidman) waste time flirting in the midst of the emergency. The movie never recovers from this portrait of the crusader and his romantic partner as complete morons.

This is also the movie that brings Robin into the movie franchise, and not surprisingly, this is no less heavy-handed. Even by the nineties there were politically correct morons who blanched at the idea of an adult superhero inducting an actual child into the business of being a superhero, and so I suppose it was inevitable that New Robin (Chris O'Donnell) was a twenty-something victim of tragedy. Since O'Donnell is only about ten years younger than Kilmer, the idea that Bruce Wayne would feel a burning need to succor this version of orphaned Dick Grayson comes out of La-La Land. Even the dry comedy of Michael Gough's Alfred can't save any of the Kilmer-O'Donnell scenes, though they're still a little less excruciating than the Kilmer-Kidman scenes.

None of the psychobabble uttered by Meridian about Batman or anything else possesses the slightest resonance with the operatic world of comic books, much less to any real-world concerns. Schumacher strains to borrow some "street cred" by adapting a sequence from Frank Miller's THE DARK KNIGHT RETURNS-- the one in which Young Bruce Wayne encounters a ferocious bat beneath Wayne Manor-- but he blows it, because he can't give the scene any personal tone; he just bulls on through it, as if he thinks it'll satisfy the comics-nerds.

Not that I really expect a lot of psychological depth in summer action movies. But at least I'd like to see the high-octane set-pieces to have some moxie, and everything Schumacher puts together is like a bad imitation of Michael Bay at his worst. I would rather watch the worst TRANSFORMERS than to ever abuse my eyeballs again with a single scene from BATMAN FOREVER-- and I mean that, like "forever."

Posted by Gene Phillips at 3:38 PM
Email ThisBlogThis!Share to TwitterShare to FacebookShare to Pinterest
Labels: combative adventures, the marvelous