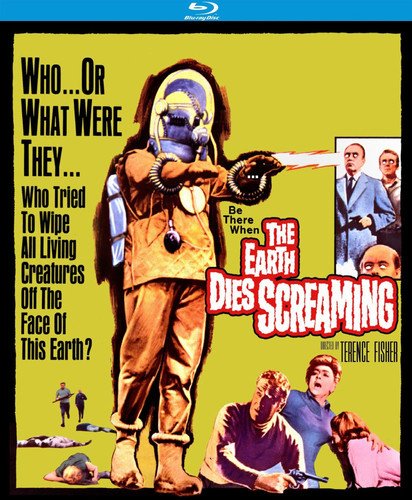 Despite the exploitative title, there's not a lot of screaming in this EARTH. Hammer horror-director Terence Fisher teamed with Harry (THE DAY MARS INVADED EARTH) Spalding to produce a nicely photographed but somewhat disappointing tale of staunch English villagers coping with a mysterious alien invasion.

Though EARTH resembles some later bucoli English tales of horror and/or SF, this time Fisher and Spalding were working for another maker of B-films, which under various names (Lippert, Regal) had also released cheapie SF-films like KING DINOSAUR. Possibly thanks to Fisher and his production team, EARTH looks better than a lot of similar low-budget fare, though Spalding's script doesn't come up to the level of the photography.

After a memorable opening in which the audience sees various English residents inexplicably stricken dead-- particularly the engineer of a still-running train-- the film focuses upon a handful of survivors who assemble in a small village. Most of the characters are fairly typical tweedy English types, aside from one transplanted American pilot, Jeff (Willard Parker). No firm reason is given as to why these particular people survived the phenomenon that slew many others. To their consternation, the half-dozen survivors witness two strange armored figures stalking the village's empty streets. When one woman approaches the two strangers, one of them kills her with a touch. One armed survivor empties a pistol at the armored men, but they walk away, paying the attack no attention.

Two more people make their way to the village, a young man and his pregnant young wife-- and from then on, the peril of the young mother and her progeny almost takes priority over the alien menace. Though the E.T.s don't show any interest in the villagers, the woman they killed comes back to life as a zombie until being slain again. Later, one of the villagers runs down an armored man in a car, revealing that it's a robot. The space-robots change a few other locals into zombies, but since the audience is never privy to the motivations of the robots' masters, it's not even certain that the robots zombify people on purpose or not.

Like a few other similar films, the aliens remain unknowable, the dramatic focus being on the interaction of the motley crew-- though there's not much drama, since none of the characters are memorable. It is interesting that the American guy automatically takes charge of the situation, though he doesn't end up doing much, except at the end he suggests that the remaining villagers go south to look for more human beings. It feels like a quick finish, given that none of them know whether or not even more aliens may be lurking about. In comparison to the tight thrills of THE DAY MARS INVADED EARTH, EARTH never delivers on its promise.

Posted by Gene Phillips at 4:13 PM
Email ThisBlogThis!Share to TwitterShare to FacebookShare to Pinterest
Labels: the marvelous