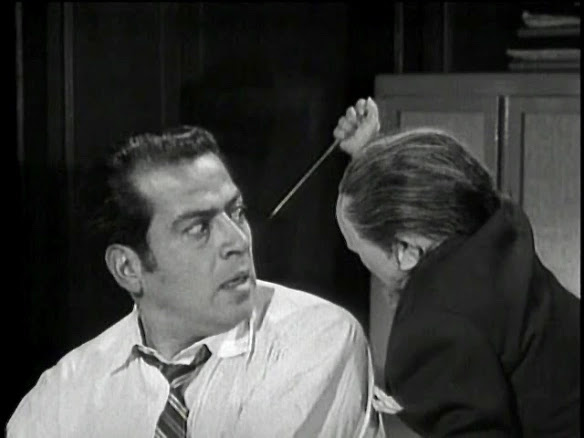 I've only watched the English-language version of CURSE OF THE DOLL PEOPLE, which ostensibly included some new scenes added by its American distributor while others from the original Mexican movie were deleted. So it's possible that a subtitled version of the original release might have been more interesting.

Still, the plot is so basic that I doubt the original had much complexity to add. Four archeologists journey to Haiti and rip off an idol from a voodoo temple, and a voodoo priest pursues the criminals back to Mexico to wreak vengeance. None of the victims possess more than the most basic characterization, and even the vengeful priest, though physically impressive with his Charles Manson looks, has no character to speak of.

However, the viewpoint character is not just the usual expert in both science and the supernatural, but is also a highly educated female, Karin (Elvira Quintana). Karin lectures his scoffing colleagues on the formidable powers of voodoo, and though she's not a crusading Van Helsing, eventually she will seek to block the priest from killing any more not-quite-innocents. Indeed, Karin's lectures on voodoo religion is the main thing that leads me to grade the film's mythicity as fair.

However, the priest is a little more inventive than the usual voodoo master, for he doesn't use the average hand-sized dolls, but the "doll people" of the title. These manikins stand about three feet tall, being of course played by midgets, though the players wear masks of human features which do not move normally and add to the dolls' general creepiness. Being small, the doll people have to sneak up on their victims before impaling them with their poison needles. In addition, the priest brings along a regular-size zombie for heavy lifting, and the zombie shows himself invulnerable to bullets.

The pacing is fairly slow, so there's not a lot of suspense until the conclusion, where Karin unveils a counter-measure to nullify the evils of voodoo. Despite some predictable sequences, this was a good effort by director Benito Alazraki, who went on to direct the first definitive Santo film.

Posted by Gene Phillips at 4:05 PM
Email ThisBlogThis!Share to TwitterShare to FacebookShare to Pinterest
Labels: the marvelous