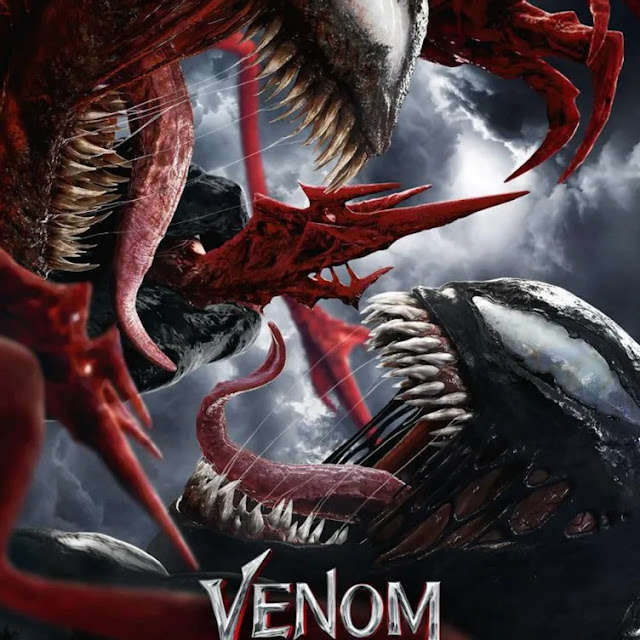 On viewing the second VENOM film, I realized that both movies had managed to take advantage of a subcategory of superhero films: the "snarky superhero." Possibly that's why this 2021 flick did so well at the box office even at a time when Covid fears were still prevalent. For reasons unknown to me, the previous master of costumed snark, Deadpool, has remained exiled from theater screens since 2018. But Venom-- the combination of hapless human reporter Eddie Brock (Tom Hardy) and an alien symbiote (also voiced by Hardy for the most part)-- made his first appearance in that same year,  and with the sequel proves himself more than able to take up the snark-slack.

As in the first film, the merger of the generally good-hearted human being with the alien results in copious scenes that resemble a conservative "superego" constantly arguing with his disruptive "id." Brock wants a normal life, but Venom is a predator who can barely restrain himself from chomping on human brains, and who constantly wants adventure and self-aggrandizement, boasting to Brock that "eighty billion light years of hive knowledge across universes would explode your tiny brain." Venom helps Brock solve a case related to incarcerated serial killer Cletus Kasady (Woody Harrelson), earning Kasady's enmity. On the day of Kasady's scheduled execution, he invites Brock to the event, and then tries to attack him, provoking retaliation from Venom. The prison guards conveniently don't see the alien's intervention, but Kasady bites off a fragment of Venom's xeno-flesh and swallows it. Somehow the flesh becomes a separate symbiote who bonds with Kasady, helping him escape the law. The new blended human-alien takes the name Carnage, who in the comics was for a time a popular Venom spin-off. This comes at a bad time, for Brock and Venom, despite their biological attunement, finally get so sick of one another that they "break up." (Some hypesters tried to make this sound like a quarrel between gay lovers, when the actual conflict feels more like a row between Felix and Oscar.)

The film's strongest elements are Venom's acidulous remarks about humans, even though he has an odd fondness for Brock's former girlfriend Anne (Michelle Williams). Anne is back again, forced to assume lawyer-duties for Brock when the cops come after him for Venom's deeds. There's also a B-plot in which Kasady/Carnage invites an old flame with a sonic super-power to help him raze the city. Oh, and the old flame, who gets the cognomen "Shriek," also carries a grudge against Officer Mulligan, Brock's confidante on the police force.

While I realize that CARNAGE couldn't duplicate the simple joys of VENOM, I didn't think that the New Symbiote in Town was interesting in his own right. Kasady is only marginally better in his psychological development, possibly because the scripters knew that the ego-id struggle of Brock and Venom was the movie's main selling point. The filmmakers unleash the same level of ultraviolence as the first film-- lots of car/motorcycle chases and metamorphic aliens slamming each other around. Yet the adventure-thrills are not as intense as those of the first film.

A credit-sequence suggests that this version of Venom will show up in the life of the Tom Holland Spider-Man. Be still my beating heart.

Posted by Gene Phillips at 2:44 PM
Email ThisBlogThis!Share to TwitterShare to FacebookShare to Pinterest
Labels: combative adventures, the marvelous