MASTER OF THE FLYING GUILLOTINE (1976) 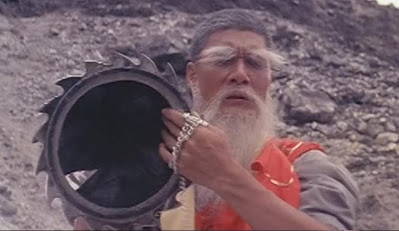 The second and last of the "One Armed Boxer" films was also a knowing swipe of a successful 1975 Shaw Brothers film, THE FLYING GUILLOTINE. This excellent online essay  sums up the provenance of the bizarre, head-chopping titular weapon, explains how Shaw got bogged down in the production of their own sequel to the successful first film. Since no one could copyright a legendary weapon, Jimmy Wang Yu co-opted the idea for his own film. I've not got around to reviewing the 1975 film, but suffice to say that I felt Wang Yu's movie an immense improvement.

It's been a little while since the end of ONE ARMED BOXER, and Tien, still one-armed, now runs his own dojo and lives a quiet life. However, two of the assassins he slew in the first film were students of a nasty old fellow named Fung Sheng. Despite being both elderly and blind, Fung is a skilled assassin in the service of the corrupt Emperor, and a master of the flying guillotine weapon. Fung can't abide having anyone slay his former pupils, so the old guy burns down his own house and sets off on a quest for vengeance, knowing only that the students were slain by a one-armed man. Fung's hearing not only allows him to navigate his way flawlessly, it allows him to listen for any mention of any one-armed man-- and when he finds one, the master immediately executes the fellow, without even bothering to check if he's the right one. 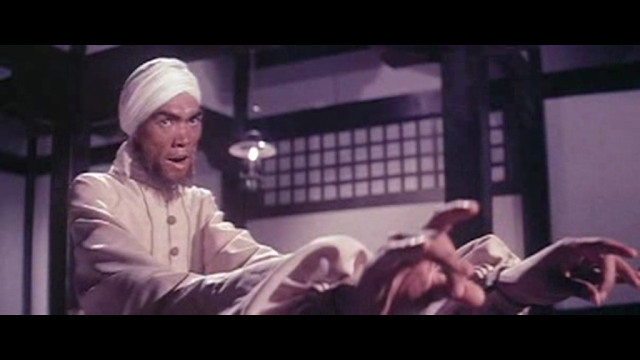 Fortuitously, there's a massive tournament somewhere near Tien's bailiwick, and he and his school are scheduled to appear. In contrast to modern tournaments, this one is a total bloodsport game, though there don't seem to be audiences as such, only a panel of judges offering some prize or other. Combatants can choose to fight with or without weapons, pitting any type of martial art against any other, and if a combatant dies, he dies. During the opening battles, the audience witnesses a variety of exotic fighters, the standouts being a barefooted Muat Thai expert and an Indian yogi who, apparently emulating the idea of the "India Rubber Man," can stretch his arms a foot longer than their normal length.

Then Fung shows up, wantonly killing another one-armed fighter, alerting Tien to his danger. When one tournament-official tries to stop Fung, the Guillotine Master slays him and brushes off the efforts of the man's daughter Shao (Lung Chung-erh). Fung wanders off and somehow enlists three of the fighters to his own cause-- the two mentioned above plus a Japanese swordsman. All three practice disciplines similar to some of the antagonists from the first BOXER film, but this time there's no mention of Tien's superhuman strength, so one might fairly assume that it wore off. This may be one reason that this time the One Armed Boxer uses tricks and traps to gain an advantage over his opponent's talents. I won't detail any of those traps here, except to say that some of them fall into my category of "diabolical devices," and that none of the traps detract from Wang Yu's spirited battles with this new set of enemies. I personally would rate the final battle between Tien and Fung to be the equal of anything staged by such masters of the genre as Lee, Li and Chan.

The plot is still simple, being about the prevention of vengeance than its accomplishment, though there is an interesting subplot in which the Japanese swordsman woos the grieving Shao. Lung Chung-erh only gets one major fight in the story, but it's a good one nonetheless. Even though some of the martial-arts abilities are clearly fantastic, I subsume even the "stretchy-arm fu" under the category of "superlative skills" because they're supposed to stem from manipulation of the "chi" and all that jazz.

Posted by Gene Phillips at 3:34 PM
Email ThisBlogThis!Share to TwitterShare to FacebookShare to Pinterest
Labels: combative adventures, diabolical devices (u), superlative skills (u), the uncanny